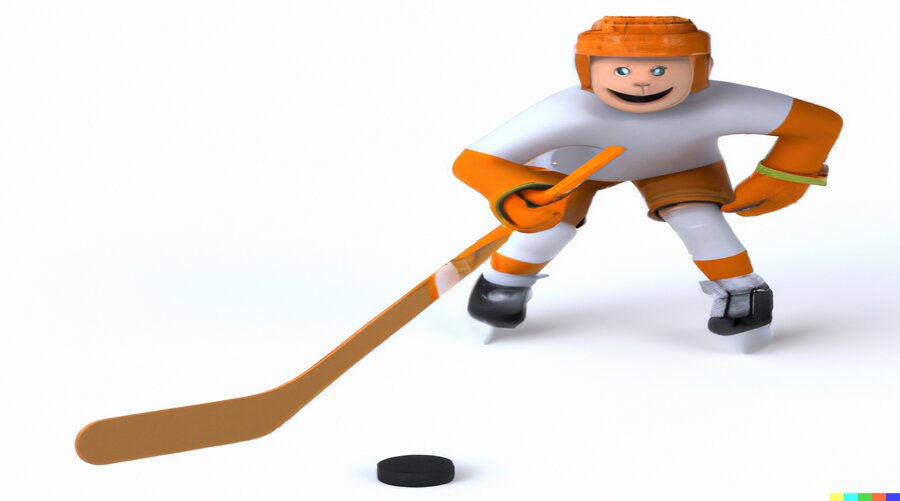 Hockey is a fast-paced and exciting sport . The game is played by two teams, each with ELEVEN players at a time, including a goalkeeper In both team. The objective of the game is to score goals by hitting a small rubber puck into the opponent’s net.

The game of hockey has its origins in the early 19th century in Canada, where it was primarily played on frozen ponds and rivers. Today, hockey is played at both amateur and professional levels around the world, with the National Hockey League (NHL) being the most prestigious professional league.

The basic rules of hockey are relatively simple. Each team attempts to score goals by hitting a small rubber puck into the opponent’s net. The team with the most goals at the end of the game is declared the winner. However, there are many other rules and regulations that govern the game, including offsides, icing, and penalties.

Penalties are also an important part of the game, as they are given to players who commit infractions such as tripping, hooking, and high sticking. Penalties result in the offending player being sent to the penalty box for a specified period of time, during which the opposing team is given an advantage with an extra player on the ice.

In addition to these basic rules, there are also many other regulations that govern the game of hockey. For example, the size of the rink, the size and weight of the puck, and the equipment worn by players are all regulated.

Hockey is a physical sport, and players must wear protective gear, including a helmet, gloves, elbow pads, and shin guards. Goalkeepers must also wear special equipment, including a larger and heavier goalie stick and larger pads to protect their legs.

To play the game well, players must have a good combination of skill, speed, and endurance. They must be able to skate well, handle the puck, and shoot accurately. They must also be able to work well as part of a team, as hockey is a sport that requires good communication and cooperation between players.

The game of hockey is enjoyed by millions of people around the world, from amateur players to professional athletes. Whether played on a frozen pond or in a state-of-the-art arena, hockey is a thrilling and exciting sport that requires skill, speed, and teamwork.

In conclusion, hockey is a game that is enjoyed by many people across the globe, it is a sport that requires skill, speed, and teamwork. The basic rules of the game are relatively simple, but there are many other rules and regulations that govern it, including offsides, icing, and penalties. It is a physical sport and players must wear protective gear, which include a helmet, gloves, elbow pads, and shin guards. It is a sport that requires good communication and cooperation between players. If you are interested in playing hockey, it is important to learn the rules, regulations, and techniques of the game.

How to improve one’s skills

Improving one’s skills in hockey takes time and dedication. Here are some tips on how to improve your hockey skills:

By following these tips, you will be able to improve your hockey skills over time. Remember, it takes time and dedication to become a better player, but with hard work and perseverance, you can achieve your goals.

how to properly maintain and take care of hockey equipment

By properly maintaining and taking care of your hockey equipment, you can ensure that it will last for a long time and perform at its best. Remember to always follow the manufacturer’s instructions for cleaning and care of your equipment.

The history of hockey

Hockey has a rich history that spans centuries. The origins of the game can be traced back to ancient civilizations where versions of the game were played on ice using sticks and a ball or object.

The modern game of hockey, however, is believed to have originated in the early 19th century in Canada. The first recorded game of hockey was played in 1875 in Montreal, Quebec, Canada. The game was played between two teams of nine players each, and the objective was to score goals by hitting a small rubber puck into the opponent’s net.

The first organized hockey league, the Amateur Hockey Association of Canada, was formed in 1887. In 1917, the National Hockey League (NHL) was formed and has since become the premier professional league for hockey in North America.

In the early days of the sport, players would play on outdoor rinks, often on frozen ponds and rivers. However, as the sport grew in popularity, indoor arenas were built specifically for hockey. The first indoor arena for hockey was built in Montreal in 1898.

Hockey quickly spread to other countries, with the first international match being played between Canada and the United States in 1896. Today, hockey is played at both amateur and professional levels around the world, with countries such as Russia, Sweden, Finland, and the Czech Republic having strong national teams.

The sport has also been included in the Olympic Games since 1920. The most successful teams are Canada and the Soviet Union/Russia, who have won a combined total of 18 medals.

In summary, hockey has a long history that began in the early 19th century in Canada. The modern game was developed and the first organized league, the Amateur Hockey Association of Canada, was formed in 1887. The sport quickly spread to other countries and it has been included in the Olympic Games since 1920.

The role of technology in hockey

Technology has played a significant role in the evolution of hockey, both on and off the ice. Here are a few ways technology has impacted the sport:

In conclusion, technology has played a significant role in the evolution of hockey. From video analysis to goal-line technology, technology has allowed teams and coaches to improve performance, and has made it easier for fans to stay informed and engaged with the sport.

The future of hockey

The future of hockey looks promising, as the sport continues to grow in popularity around the world. Here are a few ways the sport may evolve in the future:

In conclusion, the future of hockey looks promising as the sport continues to grow in popularity around the world. With the help of technology and new strategies, the sport will continue to evolve and provide exciting experiences for fans and players alike. The sport will continue to prioritize player safety and will also look for ways to engage fans and expand the sport’s reach.